Create an Account - Increase your productivity, customize your experience, and engage in information you care about.

As of April 2013, Waterford Township has a new logo design and slogan thanks to the creativity, hard work, and collaboration of 3 Waterford Kettering art students.

Contest
The Township, together with the Waterford Area Chamber of Commerce and the Waterford School District, hosted a contest for all Waterford youth ages 15-18 to design the new logo. In total, 24 submissions were received and reviewed by the panel of judges. 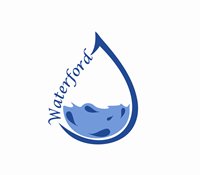 Senior Danielle Dorris designed a water droplet shaped logo which incorporates the name “Waterford” along the left side of the droplet’s curve and features water with waves inside the single droplet. Junior Lindsay Postol created typography with the Waterford Township name incorporating Dorris’ logo as the “o” in “Waterford” for use on Township letterhead. Junior Christopher Milner submitted a winning slogan that captured the judge’s attention: “With Us There Are No Boundaries.”

“We are incredibly proud of the creativity Waterford’s youth showed in their submissions for this contest,” said Gary Wall, Waterford Township Supervisor. “These students play an important role in the community and we’re excited to showcase that talent for years to come with the new logo, letterhead and slogan.”

Most of the contest entries were submitted by Waterford Kettering High School students led by art teacher Kathleen Robinson. Ms. Robinson said her students developed artwork over a 3-week period of brainstorming, sketching, and then finally refining their logos with graphic design software for a professional and functional appearance.

“Students brainstormed as a group about what Waterford means to them and to their families,” said Robinson. “They agreed they wanted a design that was clean and versatile representing Waterford in a modern style while still valuing what most citizens do -- the bodies of water and the community we have built around them.”

Wall said the slogan was an unexpected bonus in the contest. ‘With Us There Are No Boundaries’ was originally submitted as part of a logo that wasn’t selected for its design, but the phrase stood out.

“The motto is representative of the ‘can-do’ attitude and community spirit of Waterford’s residents,” said Wall. “We can’t afford to be limited by boundaries; we’re open to new ideas in how we approach challenges. This slogan says it perfectly.”

The new logos and slogan were unveiled to the public, and the contest winners were recognized at the Board of Trustees meeting, Tuesday, May 28, 2013.
Online Payments
Parks and Recreation
Report a Concern
Agendas and Minutes
Notify Me®
[]